WHY IS WEARING A KILT A SIGN OF TRUE MANLINESS? Is there anything manlier than liberty and individuality? Science suggests that wearing kilts can give men both, and even more. Researchers from the Erasmus MC University Medical Centre in Rotterdam, Netherlands have closely studied the impact of kilt-wearing on men. It was found out in the study that kilt-wearing was associated with attractiveness, confidence, efficiency, as well as overall prominent feelings of masculinity. 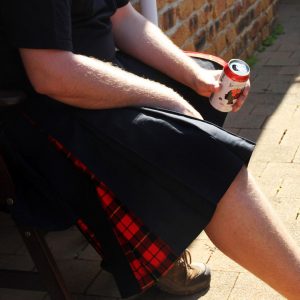 Wearing kilts has been proven to induce both physical and psychological indications of manliness. In ancient Rome, one of the ways men showed strength was by exposing their well-turned calves. True enough, a well-turned calf tends to be muscular, which indicates that a man with good calves can run fast, climb well, and achieve other such feats. In addition to that, men who already wear kilts are advocates of anatomical freedom. They invoke the idea that kilts, unlike restrictive trousers, support a man in fulfilling his duty to procreate.

So how does kilt-wearing help in fertility? Well, it has something to do with the ideal daily environment for one’s scrotum. When men’s balls hang low and wobble, it mostly means that there is too much heat. Sperm thrive better in temperatures of about 37 degrees Celsius, and preferably, lower. Dangling testicles become slightly cooler since they are kept away from the body to some extent.

With that, the best scrotal temperature is achieved when a man stands up naked; let’s assume the area is in room temperature. This means that the ideal temperature can only be given to the sperm when men’s balls hang freely. However, in modern day where most men wear pants, that’s most definitely not the case since the balls are held near the body and even closer by the pants plus briefs. Thus, tight bottoms result to lower sperm count, which means lower fertility rate. It may not be 100% objective for now, but more and more data point to the kilts’ effectivity in raising fertility.

How About Men Whose Lifestyles Are Slightly Outside of the Average Ones?

Kilts can still be for them. Kilts may be a bold fashion statement, but they were also worn in battle. European and American soldiers during the first world war wore Kilts to the battlefield. Even today, kilts are still donned during military ceremonies and other such formal occasions.

In the modern day, kilts are progressively used to show off strength: “you’re only talented enough if you can do it in a kilt”. This makes kilts iconic. While skirts are generally seen as a thing of the past, kilts are promoted as ‘the garment’ for men of the future. Wearing kilts means embracing about 200 years of history and a future of infinite possibilities.

Kilt-wearing men pronounce their uniqueness to people around them more; this is what proclaims the solidity of their self-values – their manliness. In the study mentioned above, kilt wearers attracted more positive attention from a population of both men and women. The decision to dawn one on truly takes a real man’s self-assurance.

One can even say that wearing kilts is a rebellious act, a direct defiance to social conventions. It’s the same thing with how punks wear mohawks, and emo people wear bangs – it defines them, and society cannot tell them to do otherwise. Kilts are worn as a mark of a true man’s confidence. As a play on Shakespeare’s, “apparel oft proclaims the man…”, we say, “Kilts maketh real men.”

So put on your kilt, pull off your doubts, and strut around proud. Kilts are the future and real men always look ahead. Show the world that you are not afraid of their constructs – no one can call you a ‘girl’ because you are the very definition of a man.

Are You Ready To Show Off Your True Manliness?

Kilts do not only look fashionably great but serve a practical function as well. It is good to note that men who are not scared to wear kilts are men who have strong feelings of masculinity and pride. This remains true, that both men and women tend to effortlessly notice kilt-wearing men wherever they go. Don’t be afraid of wearing kilts. Just so you know, kilts definitively have the unique capability to proclaim masculinity, and the wearers should definitely be proud to put one on.

Ozkilts is here to join you in your journey to choosing the kilt that represents your personality. We have a solid range of kilts that are suited for every occasion or activity you might think of. We are the only company with utility kilt range designed by professional workwear designer – giving men (and women) a room to breathe and a sense of complete freedom. For more information you can get from donning on a kilt, you can visit this link: https://ozkilts.com/