Why Utility Kilts and Scotch Go Together So Well Together Sean Connery, Hogwarts School of Witchcraft and Wizardry, Haggis, Utility Kilts, the Loch Ness monster, Gerard Butler, William Wallace, Scotch, Shrek, and of course The Highlander. All wonderful exports from the Scottish isles. Although I can talk for hours about the pure 90’s awesomeness of Duncan Macleod (Connor Macleod can suck it) in 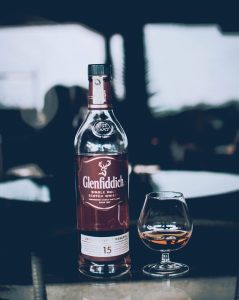 the highlander television series and its superiority to the Movie Franchise. Alas, I’m here to talk about Scotch and Kilts, relatively less awesome than the highlander but still cool in their own right, and why they are awesome together.

What’s Up with kilts?

The kilt, an attire that has evoked the image of highland warriors with two-handed Scottish claymores on their backs, screaming FREEEEEDOOOOOOOM!!!! It symbolizes Scottish identity, patriotism with more than just a hint of rebellion in it. The utility kilt is definitely a manly man’s garb.

Yes, it‘s scotch whisky; without an ‘E’. There is a difference. Scotch is Whisky made in Scotland while Whiskey is made elsewhere. Aside from spelling. There’s a distinct difference in Geography, ingredients, and blending. We’ll talk about that here. Generally, whisky or whiskey is distilled liquor is made from fermented cereal grain mash and aged in wooden barrels, usually made of oak.

So… when is a liquor whiskey, and when does it lose the ‘E’. The quick guide to that; if it was made in Canada, Scotland or Japan then ditch the E. Those are whisky. While in the US and Ireland you use Whiskey.

Since we’re talking about the Whisky. Might as well take a deeper dive into Scottish Whisky. Aka, Scotch.

Scotch Whisky…Seriously not even scratching the surface of this topic.

Like I said a couple of paragraphs back. Scotch is Whisky that was made and bottled in Scotland, and because nothing in life is that simple there are a couple of main varieties of scotch.

Arguably the most popular variant of scotch. Single Malt Scotch Whisky is made by a single distillery and the only ingredients you can legally use in it is malted barley and water. That’s it. Single Malt contains no other cereal, not grain. It should also be distilled, produced, and bottled in Scotland to be called a Scotch. What we get is amber nectar of the Gods. Smooth to the point that it shames silk. A good Scotch is proof enough that there is a God and that he loves us all and that everything will be alright. As you can see I am a big fan of a Macallan 12 Sherry Cask and yeah… I’m getting a glass when I’m done writing this article. And No, you can’t have any.

The lesser–known variant of scotch. A single grain is a malted barley and water… that’s it. Well except for the addition of some whole grains and cereals… Well, those additions made it so that it can’t be called Single malt anymore. Have I tried it? Not yet. Hopefully, I can find some good examples of it from where I’m from.

This is made by mixing single malt whisky from different distilleries to create a new batch of whisky.

Just like the Blended Malt, the Blended grain mixes two or more batches of single grain from different distilleries to make a single batch.

Okay, this one is a bit weird but still just as delicious. Double malt is basically a Single Malt whisky but aged in more than one type of cask. The name double malt is a misnomer the true term is double wood / triple wood (if it has been aged in three different casks). So if you see let’s say a Laphroaig Islay Scotch Whisky Triple wood.  That means:

Why DO Utility Kilts and Scotch go well together?

It’s because Scotland is awesome. We all have our romanticized images of Scotland. Mine is where an immortal Sean Connery is holding William Wallace’s claymore and he’s doing battle with Nessie. Now I know this might be the Macallan 12 speaking but although my mental image of Scotland Is grossly inaccurate but the Real version is just as epic. 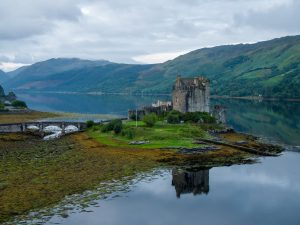 It’s a combination of Natural and Man–Made beauty, the culture, the history, and the people. You can find Castles from a bygone age. Rolling misty landscapes. Glistening Lochs. Picturesque villages, sites filled with myth and legend like Rosslyn chapel, the Loch Ness Monster, and Hogwarts (the castle used as Hogwarts is in Scotland).

The people are rowdy, friendly, and extremely helpful to each other.

There are other reasons why Scotland is awesome…. Oh, the Highland Games! Man! You should watch those. I mean they toss around a log. A whole log. Now that’s manly as all heck.

Anyway… The reason why Utility Kilts and scotch go together is that for a brief period of time we can feel like we’re a part of the culture that we appreciate so much. Be it the actual real–life culture or the fictionalized one we have in our heads. By wearing a utility kilt, we feel the manly aspect of the Scottish culture and that includes the history and patriotism that comes bundled in that particular dress. When we drink scotch we feel the care and craftsmanship of the people. It doesn’t hurt that their whisky is so damn great as well.

So, pick up your bottle of Scotch and Utility Kilt and start enjoying life!

“It is one of the most hauntingly beautiful places in the world, the history is fascinating, the men are handsome and the whisky is delicious.”-JK Rowling