Utility Vs Traditional: The Battle of Two Kilts

A tale as old as time. A rivalry as big as Darth Vader vs Luke Skywalker, Godzilla Vs Kong, Manchester United vs Liverpool, the Big Mac vs the Whopper, Thanos vs the Avengers, Whisky vs Whiskey,  PC vs Macs, Android vs iPhone. This article will be a discussion of Traditional kilts vs Utility Kilts.

Just like everything, there is a pushback against any attempts to modernise something that’s been entrenched in tradition. For us, kilt enthusiasts the emergence of utility kilts has been a source of controversy some see it as an affront to the traditional tartan, an insult to Scottish tradition.

Here’s our justification on why modern iterations of the kilt are not. But before looking at the present, we need to know where Kilts originated.

The History of Kilts… In a nutshell.

What we know as the modern kilt was originally just the lower part of a full-length attire called the great kilt. The great kilt or belted plaid was seen as far back as the tail end of the 16th century, is basically a full-length garment.

The lower half as I just said was worn as a kilt, while the upper half can be worn as either a cloak or a hood.

Now here’s the kicker. Contrary to the movie Braveheart (gasp) the scots did not wear their kilts to battle, instead, they donned bright yellow war shirts.

Fast-forward a century or so, in the late 17th century the small kilt was first introduced. Apparently, a Quaker named Thomas Rawlinson was credited to be the inventor of what we now know as the kilt. Originally known as the small kilt or walking kilt, it was invented by Rawlinson, back in 1720 because he found that the great kilt was in his words “cumbrous and unwieldy” for what he was doing for work.

There are suggestions that highlanders have worn only the bottom parts of great kilts before, but Rawlinson’s design was the earliest documented of a kilt with sewn-in pleating, a distinctive feature of our modern-day kilts.

Fast-forward to 1746 when King George the second enacted the Dress Act of 1746 basically putting a ban on all highland dresses including the kilt.  Penalties for violation were severe and includes 6 months imprisonment just on the first offence alone, all for the purpose of suppressing highland culture.

Despite the Dress Act, Kilt wearing did not disappear and instead has taken a new meaning, that of protest against the ban. The ban was lifted in 1782, at that time landowners in the highland started Highland societies where they promoted the general use of the highland dress (kilts).

From that point in time, the kilt has gathered popularity to become an icon of Scottish culture and Celtic heritage.

Traditional Tartan Kilts VS Utility Kilts, what are the difference.

Designs: The traditional Tartan Kilts are made from wool. Tartans are basically plaids that have a specific pattern and colours that are associated with a particular clan.  There are more than 100 clan-specific tartans. So when picking a tartan kilt be aware of this fact.

Although not illegal, it can be considered insulting to the clan if they see it. The apron is about 4 to 16 inches wide that covers the front area of the wearer’s legs, while one end has a fringe ending to make the back pleating stand out more. The reason for the back pleating was so that they could use more fabric and making the kilt wearer warmer in cold temperatures. Traditional kilts do not have pockets as well since wearing a Sporran

Utility kilts are basically the modern evolution of the traditional tartan kilts, made according to the modern need and also keeping the tradition alive along with meeting the needs of the wearers. The apron is about 10 inches wide.

The key to modern kilts is modularity. Modern kilts have cargo pockets, thus removing the need for a sporran. Depending on who you buy your utility kit from, Utility kilts will feature different accessory attachment points like Hooks, D rings, MOLLE webbing (for that extra tactical look when you’re attaching your magazine pouch or admin pouch).

Manufacturing: The Traditional tartan kilt is absolutely hand-made. Made by an artisan’s practised hand with just a needle and thread, without using any machines in the production process. No wonder they are expensive.

Utility kilts on the other hand are basically the opposite of the traditional kilt. Machines are used to ease production.

Kilt Fastening System: With the really old Great kilts / Plaids. The only fastening system you have is a big leather belt or pieces of fabric of the same colour. The traditional kilt on the other hand is adjustable leather straps.

Storage:  Traditional tartan kilts are not made with pockets.  So with guys being guys, we need to put stuff in our pockets, so enter the Sporran. A sporran is basically the Celtic predecessor to the modern-day Fanny pack (I can feel all the hate, but think about it.) A sporran is literally a waist pouch that you put your stuff in because a kilt has no pockets.

Modern Utility kilts, on the other hand, come in a multitude of designs, many of them have integrated cargo pockets or ways to attach pockets to your kilt. Being called utility kilts involves a certain level of utility, and putting stuff in your pockets is the bare minimum. Aside from that, some utility kilts are modular and can attach different accessories to add to the cargo-carrying capacity of the kilt.

Fashion: The traditional tartan kilt is a versatile piece of kit. Depending on your accessories, it can serve as everyday wear to the most formal black-tie events. It all comes down to what you wear with your kilt. 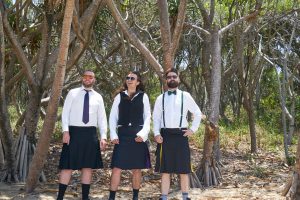 As for the utility kilt, it’s designed to be a kilt that can be your daily driver. Be it for work or play. You might ask if a utility kilt is so versatile, then where else can you wear it.

It depends on the material and the colour of the kilt. You wouldn’t want to go to a formal wedding dressed in a denim kilt, or a black-tie event in a leather kilt  (or if you want to I’m not the fashion police to judge you) It all depends on your style. As for conservative choices. You can’t go wrong with black fabric.

Honestly speaking, in my eye, the traditional tartan kilt and the utility kilt are two sides of the same coin. The Tartan is about honouring the past while the utility kilt is about looking forward to the future, both because they love kilts no matter where in the world you may be. Speaking of which.

Do you love kilts as much as we do? We offer free shipping wherever in the world you are. Check out our range of utility kilts.